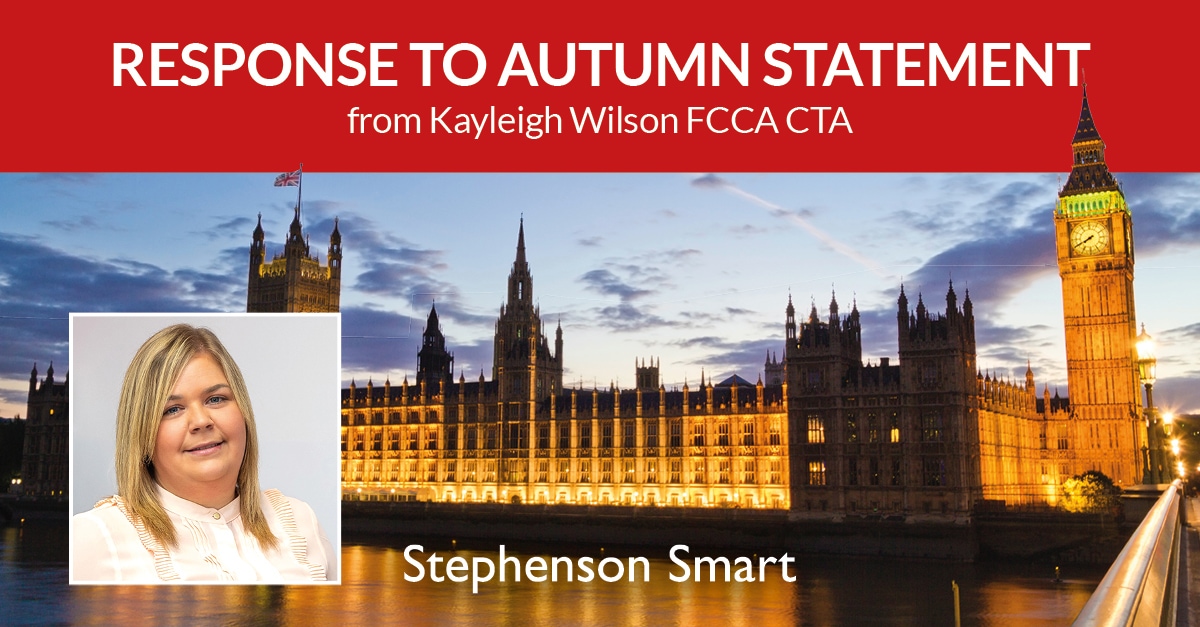 It has been a turbulent few months in UK politics, that has impacted hugely on our economy.  On 17 November 2022 the current Chancellor, Jeremy Hunt, announced his Autumn Statement to the Commons; the government’s third fiscal statement in as many months.

This was a statement that was supported by research from the Office of Budget Responsibility and, most evident by his smiling and head nodding when it was delivered, the Prime Minister, former Chancellor, Rishi Sunak.

The Chancellor laid out three core priorities of stability, growth and public services. The government is seeking a balanced path to support the economy and return to growth, partially through public spending restraint and partially through tax rises.

But how does the Autumn Statement 2022 announcement affect you?

The government had previously announced that there would be a cut in the basic rate of income tax, from 20% to 19%, from April 2024. This was to be accelerated so that it took effect from April 2023. However, whilst the government aims to proceed with the cut in due course, this will only take place when economic conditions allow and a change is affordable. The basic rate of income tax will therefore remain at 20% indefinitely.

The income tax personal allowance and higher rate threshold were already fixed at their current levels until April 2026 and will now be maintained for an additional two years until April 2028. They will be £12,570 and £50,270 respectively.

The government will uprate the married couple’s allowance and blind person’s allowance by inflation for 2023/24.

The government has also confirmed that, from April 2023, the rates of taxation on dividend income will remain as follows:

As corporation tax due on directors’ overdrawn loan accounts is paid at the dividend upper rate, this will also remain at 33.75%.

These changes will apply to the whole of the UK.

In September 2021 the government published its proposals for new investment in health and social care in England. The proposals were intended to lead to a permanent increase in spending not only in England but also by the devolved governments. To fund the investment the government introduced a UK-wide 1.25% Health and Social Care Levy based on the National Insurance contributions (NICs) system but ringfenced for health and social care.

However, the government has:

According to the government, not proceeding with the Levy will reduce tax for 920,000 businesses by nearly £10,000 on average next year.

In addition, it will help almost 28 million people across the UK save £330 on average in 2023/24, with an additional saving of around £135 on average this year.

More detail for employees and employers

The changes took effect for payments of earnings made on or after 6 November 2022, so:

The government hopes that most employees will receive the NICs reduction directly via the payroll in their November pay but acknowledges that some will have to wait until December or January, depending on the complexity of their employer’s payroll software.

More detail for the self-employed

Finally, the government will fix the level at which employers start to pay Class 1 NICs for their employees at £9,100 from April 2023 until April 2028.

A number of changes were made to the Stamp Duty Land Tax (SDLT) regime earlier this year and these remain. Generally, the changes increase the amount that a purchaser can pay for residential property before they become liable for SDLT.

The changes apply to transactions with effective dates on and after 23 September 2022 in England and Northern Ireland. These changes do not apply to Scotland or Wales which operate their own land transactions taxes.

There are no changes in relation to purchases of non-residential property.

Higher rates may be payable where further residential properties are acquired.

However, the government has now confirmed that these changes will be a temporary SDLT reduction. The SDLT cut will remain in place until 31 March 2025 to support the housing market.

It had been previously announced that the expected increase in the rate of corporation tax for many companies from April 2023 to 25% would not go ahead. However the government announced on 14 October 2022 that this increase will now proceed and this has been confirmed.

The Annual Investment Allowance (AIA) gives a 100% write-off on certain types of plant and machinery up to certain financial limits per 12-month period. The limit has been £1 million for some time but was scheduled to reduce to £200,000 from April 2023. The government has announced that the temporary £1 million level of the AIA will become permanent and the proposed reduction will not occur.

Up to 31 March 2023, companies investing in qualifying new plant and machinery are able to benefit from capital allowances, generally referred to as ‘super-deductions’. These reliefs are not available for unincorporated businesses.

Companies incurring expenditure on plant and machinery should carefully consider the timing of their acquisitions to optimise their cashflow.

The government will also extend the 100% first year allowance for electric vehicle chargepoints to 31 March 2025 for corporation tax purposes and 5 April 2025 for income tax purposes.

This government states that ‘this reform ensures that taxpayer support is as effective as possible, improves the competitiveness of the RDEC scheme, and is a step towards a simplified, single RDEC-like scheme for all’. The government will consult on the design of a single scheme and consider whether further support is necessary for R&D intensive SMEs. As previously announced at Autumn Budget 2021, the R&D tax reliefs will be reformed by expanding qualifying expenditure to include data and cloud costs, refocusing support towards innovation in the UK, and targeting abuse and improving compliance.

From April 2023, companies will be able to raise up to £250,000 of Seed Enterprise Investment Scheme (SEIS) investment, a two-thirds increase. To enable more companies to use SEIS, the gross asset limit will be increased to £350,000 and the age limit from two to three years. To support these increases, the annual investor limit will be doubled to £200,000.

From April 2023, qualifying companies will be able to issue up to £60,000 of Company Share Option Plan (CSOP) options to employees, twice the current £30,000 limit. The ‘worth having’ restriction on share classes within CSOP will be eased, better aligning the scheme rules with the rules in the Enterprise Management Incentive scheme and widening access to CSOP for growth companies.

The VAT registration and deregistration thresholds will not change for a further period of two years from 1 April 2024, staying at £85,000 and £83,000 respectively.

The government will set the rates for the taxation of company car benefits until April 2028 to provide long term certainty for taxpayers and industry. Rates will continue to incentivise the take up of electric vehicles.

In addition, from 6 April 2023 car and van fuel benefits and the van benefit charge will increase in line with inflation.

In addition, from April 2025 electric cars, vans and motorcycles will begin to pay Vehicle Excise Duty in the same way as petrol and diesel vehicles. According to the government, this will ensure that all road users begin to pay a fair tax contribution as the take up of electric vehicles continues to accelerate.

The government will increase the National Living Wage (NLW) and National Minimum Wage from 1 April 2023 as follows:

The Autumn Statement 2022 sets out reforms to ensure businesses in the energy sector who are making extraordinary profits contribute more. From 1 January 2023, the Energy Profits Levy will be increased to 35% and extended to the end of March 2028 and a new, temporary 45% Electricity Generator Levy will be applied on the extraordinary returns being made by electricity generators.

The Energy Price Guarantee (EPG) will be maintained through the winter, limiting typical energy bills to £2,500 per year. From April 2023 the EPG will rise to £3,000.

The government is also setting a national ambition to reduce energy consumption by 15% by 2030, delivered through public and private investment, and a range of cost-free and low-cost steps to reduce energy demand.

It was predicted that this would be a tough fiscal statement, with tax rises announced.  The government blaming the long-term impact of Covid on the global economy and supply chains, and Russia’s war on the Ukraine.

The Office of Budget Responsibility has now said that we are in recession, this Autumn Statement 2022 designed to bring stability and growth to our economy to lessen the impact. Let’s just hope that the current Prime Minister and Chancellor stay in post long enough to see the announced changes through.

If we can help support you to understand the impact of these announced changes to you and your business, please get in touch.

Following the announcement to impose another lockdown, we have taken the decision to close our offices to visitors.

We are at our busiest time of year but know that we are more than able to support our clients remotely through email, telephone, and video calling. Our teams are being fully supported to work from home and our IT infrastructure is robust enough to allow this to happen securely.

Our main concern is the health and wellbeing of our staff, clients, and communities.

We encourage the dropping off/collecting of records by prior arrangement, by contacting the office who usually oversees your accounts.  We can also make arrangements for the signing of important documents.

We will continually review our situation, in accordance with government guidance, and update you as and when the situation changes.

As we emerge from lockdown, all our offices have been placed in Tier 2. This means that government guidance is still to work from home where possible.

To follow this guidance and keep our staff, clients, and communities safe, our offices will largely remain closed to visitors.

We are at our busiest time of year but know that we are more than able to support our clients remotely through email, telephone, and video calling. Our teams are being fully supported to work from home and our IT infrastructure is robust enough to allow this to happen securely.

We are happy to receive records, and see clients in person where no other option is possible, by prior arrangement only. Arranged by contacting the office who usually oversees your accounts.

Following the government’s announcement to impose another lockdown in England from 5 November to 2 December, we have taken the decision to close our offices to visitors.

We are coming up to our busiest time of year but know that we are more than able to support our clients remotely through email, telephone, and video calling. Our teams are being fully supported to work from home and our IT infrastructure is robust enough to allow this to happen securely.

Our main concern is the health and wellbeing of our staff, clients, and communities.

We encourage the dropping off/collecting of records by prior arrangement only, by contacting the office who usually oversees your accounts.

We will continually review our situation, in accordance with government guidance, and update you as and when the situation changes.

In line with the latest government advice our offices remain closed, as we are able to communicate with and support our clients and continue to work on their accounts from our homes.

We are organising with clients to receive their books, please contact us to arrange this.

Keep safe and well – from the team at Stephenson Smart.

Open 9am until 5pm Tuesdays and Fridays

Top
We use cookies to ensure that we give you the best experience on our website, find out more.